The daily sunspot drawings are performed at the Specola Solare Ticinese since October 1957. Between 1957 and 1980 the Specola belonged to the Eidg. Sternwarte of ETH Zurich (director prof. Max Waldmeier) and the corresponding drawings were archived by that institute (now called Institute of Astronomy – ETH Zurich). Starting from 1981 the Specola is independent and the original drawings are archived locally. Since January 2004 the drawings are scanned and made available on the WEB. In the meantime it has been possible also to scan all the drawings made since 1981, which can be downloaded from the Web as well.

The main purpose of the drawings is to determine the relative number (R) of the solar activity (called also Wolf number). In this context the Specola is considered worldwide as the reference observatory by the SILSO in Bruxelles. The relative number is calculated according to the formula R = k.(10.g+f), where g is the number of sunspot groups, f the number of sunspots and k is a reduction factor which depends from the observer, the instrument and the observing conditions.

The drawings are always performed with the white light projection method (diameter of the Sun image 250 mm) according to the Zurich standard. A Zeiss Coudé refractor is used (D/f 150/2250 mm). The drawings are oriented with a precision of ±1°. When seeing is good enough (most of the cases), the quality of the sunspot drawings details is accurate and can be used for the morphological analysis of sunspots and for the determination of their heliographic position.

The obtained image is specular: heliographic North above and eastern limb on the right.

Below we report a drawing example with the explanation of its content: 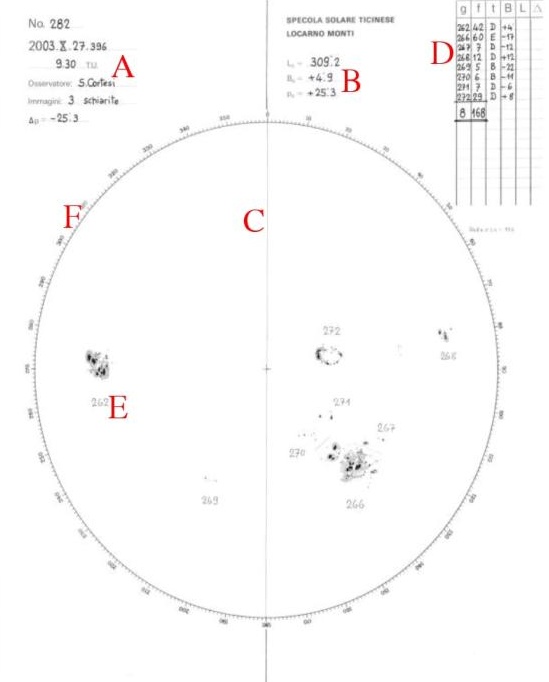 A = Drawing number of the current year, date, time of the observation, name of observer, seeing (1=perfect, 5=very bad), angular difference between sheet orientation and geographic axis.
B = Heliographic coordinates of the central meridian at the observing time.
C = Solar rotation axis.
D = Table with the group number, the evaluated number of sunspots f, the group class (Zurich classification) and the heliographic group latitude (± 1°).
E = Group number (numbered since beginning of the current year).
F = Solar limb with degree marking.